They join us periodically on the podcast to discuss the emerging technologies and issues in Cooperative Extension, and what's going on in EdTechLN. In the conversation below, we focused on the Extension Committee on Orgaization and Policy's Innovation Task Force, which Paul and Jamie both served on.

On November 3, 2016, I'll post the 100th episode of the Working Differently in Extension podcast.

I started the podcast with my former colleague Julie Kuehl back in December 2010. The first 16 episodes featured Julie and I talking about technology. When Julie left NDSU, I re-imagined the podcast as an interview show with the first episode in that style, an interview with Dan Cotton, being posted in January of 2012.

Since then, I’ve recorded more than 75 interviews with Cooperative Extension folks across the country.

What do you think I should do for episode 100? Is there a guest you'd like to hear? Do you have ideas for a special 100th show?

I'd love to hear what you think. Thanks!

When I set up my interview with John Ivey, North Carolina Cooperative Extension agent in Guilford County, I was interested in the shared use kitchen he helped set up because it seemed innovative that Cooperative Extension would offer a facility where they might have only offered education.

That was just the tip of the iceberg. When John described how the shared use kitchen brought together much of what Extension has to offer: agriculture, entrepreneurship, community development and food safety. Add that to the impetus for the project, a finding that Guilford County was among the lest food secure counties in the nation, and you can see that Guilford County's shared use kitchen is a much more significant innovation than I had thought. 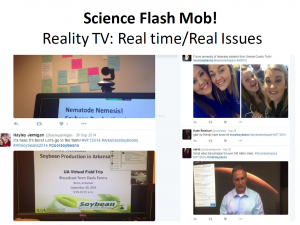 The University of Arkansas Soybean Science Challenge is a multi-faceted effort to engage high school science students in “real-world” scholarship around soybean production.

Karen Ballard, Professor of Program Evaluation at University of Arkansas, Division of Agriculture, Cooperative Extension Service joined us to talk about the virtual field trips, science fair awards and online courses that make up the Challenge. In addition, Karen shared her insights into how Extension can reach young people and be more innovative.

I hope you enjoy the conversation.

This morning I came across the video below in my Facebook news feed. It had been shared by one current and one former Extension educator. You can watch it if you wish, but let me save you some time. It is a highly embellished version of the story of how Francis Scott Key wrote the "Star Spangles Banner," the first verse of which became the lyrics of America's national anthem. It is riddled with half-truths, stretched truths and outright fabrications.

I didn't get very far into the video before I began to wonder about its veracity. When the narrator referred to Fort McHenry as "Fort Henry," my internal alarms went off, and I started some cursory Internet searches to check the facts of the video. It did not take long to find credible sources that contradicted many of the points of the video.

I think everyone, especially educators, and especially educators representing an organization that defines itself as research-based, has a responsibility to do at least a little work checking to make sure something is true before sharing it on social media (Assessing the Reliability of Online Information).

I understand some people want to keep their personal lives separate from their professional lives. I know it can be a serious burden for county agents to be always on duty, whether they are in the office or at the grocery store, but that's the job. Even when you are sharing on a personal social media account accessed by only family and close friends, your role as an educator is part of your persona. My mother-in-law spent her whole career in dentistry. I expect that when she shares something with me about tooth and gum care, even in a personal context, that it is based on research or the evidence she has observed in her experience.

Many Extension professionals are generalists and all are representatives of universities, so the expectation of sharing research or evidence-based information extends beyond our particular specialties. We can't just click the retweet or share buttons if we like a headline or a video fits our personal view of the world. When we do, we are not only reflecting on Cooperative Extension and our universities, but also reflecting on the importance of science, research and the truth.

Chuck Hibberd, dean and director of Cooperative Extension at the University of Nebraska - Lincoln, speaks off-the-cuff about learner engagement, social learning and other subjects key to Extension's future like no other administrator I've met.

Earlier this year, I was assisting with a workshop for Nebraska Extension leaders. The workshop opened with a video message from the director. I thought it would be a standard welcome. Instead Chuck Hibberd spoke, unscripted, about conversational vs. transactional programming, addressing complex issues and the importance of networks.

We talked about some of those things, as well as learner engagement and the future of Extension on the latest Working Differently in Extension podcast.

The book's central idea is that we have lost our tribal connection, our opportunity (willingness?) to sacrifice ourselves for the sake of others, and that loss has negative psychological impacts. The idea and Junger's argument in support of it are fascinating. I highly recommend the book.

One point that stuck with me is that our veneration of veterans and active service members might be hindering their reintegration into society. Junger writes about how "shared public meaning" of a war helps reduce the alienation soldiers feel when they return home by providing a context for their sacrifice that is acknowledged by most of the public. He goes on to say that the constant thanking of veterans and service members and the recognition they receive at large sporting events does not develop "shared public meaning," but may further alienate those who served.

Junger writes, "These token acts only deepen the chasm between the military and civilian population by highlighting the fact that some people serve their country but the vast majority don't."

Junger also points out that the American public is disconnected not only from the military but also from other jobs that directly support our culture of consumption, including farming.

As I read that, I was reminded of Facebook posts that read, "Farming is like any other job, only you punch in at age 5 and never punch out," or "During harvest farmers give up meals at their table, so we can have meals at ours." Given Junger's argument, do posts messages like those above help connect the public to agriculture or further widen the gap?

I think it's the latter. If we want to reconnect consumers and producers, service members and those they protected, or those who have become alienated in our communities, we need to focus on what we share, not on our differences.

When I read the article, "Rural Health Inequities and the Role of Cooperative Extension" in the Journal of Extension, I knew I wanted to have the authors (Lauri Andress and Cindy Fitch) on the Working Differently in Extension podcast.

So much of their article, spoke to things I believe about complex issues, using networks to address those issues, and Extension's potential role in those networks. The article makes it clear that the decisions people make about their health happen in context, and knowledge transfer alone is not enough to address health issues in context. According to the authors, "Successful interventions (in addressing diabetes) have focused on a range of determinants, including capacity building, community participation, community development, systems change, smas facelift, health education, food preparation, and physical activity classes."

Andress and Fitch believe Cooperative Extension is uniquely positioned to address rural health inequities on a number of fronts. I agree, but I also think Extension alone cannot solve this problem. We need to work with a wide range of organizations that can address this complex issue in ways Extension can't or could never imagine.

I hope you enjoy our conversation.